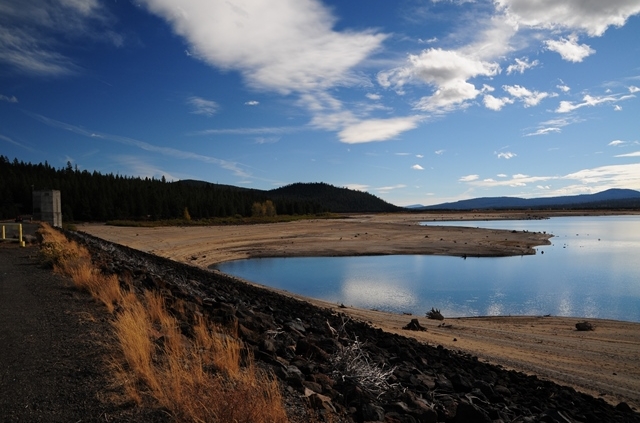 As the 2020 irrigation season winds down, it’s important to reflect upon where we started and how we’ve gotten to where we are today. And in light of these challenges, we continue our best efforts to look forward and to remember that supply conditions can change on a weekly, even daily basis, as supplies diminish.

It goes without saying that the lack of snow in the mountains from a dry winter and spring created conditions where “natural flow” in the Deschutes and Crooked systems has been and continues to be very poor at best. North Unit Irrigation District (NUID) began the irrigation season with Wickiup Reservoir at 141,000 acre-feet, the second-lowest irrigation season starting point on record. The lowest on record, many may recall, was last year’s (2019) starting level of 137,000 acre-feet.  And although NUID set allotments of 1.25 acre-feet per acre for Deschutes River lands and 0.60 acre-feet per acre for Crooked River lands there was concern whether those allotments could be met as the season progressed.

This meant yet another year where NUID relied heavily on storage from Wickiup Reservoir, which will again end up at very low levels by season’s end.

NUID began the 2020 irrigation season the first week of April to take advantage of early-season flows in the Deschutes system.  As a reminder, increased early season flows is an operational requirement to meet Oregon spotted frog biological conditions.  In addition to taking early Deschutes flows, NUID began early pumping of available flows in the Crooked River system in an attempt to conserve storage in Wickiup Reservoir for use later in the season.  As a result, NUID called on, and began pumping, its available stored water from Prineville Reservoir (10,000 acre-feet) beginning on April 14.  As an indicator of how poor natural flows in the basin have been, throughout the spring, when natural flows are often at their peak, the minimum bypass flows could not be met for periods of time in the Crooked River system simply because there was not enough natural flow in the river to meet minimum flow requirements.

Early warm weather in April and May created early snowmelt that exhausted much of the snow supply for the season – the snowmelt was rapid and early this year.  Early hydrologic indicators and outlooks predicted water shortages across much of Oregon for the 2020 summer including the Deschutes and Crooked River Basins.  The short periods of unseasonably warm temperatures combined with a below-average snow season meant significantly lower stream flows in many areas. This hydrologic scenario has played itself out over the past decade with more below average hydrologic years than average or above average years.  As a result, the region is seeing and experiencing the cumulative effects of these below-average snow and precipitation years.  The weak snowpack in recent winters is also depriving underground aquifers of the water needed to fully recharge streams and creeks, which fill up reservoirs and provide flow to rivers. To put this into perspective, we often look to the Snow Water Equivalent (SWE), which measures the relative snowpack storing water in our surrounding mountains, and is measured as a percent of the average snowpack, where 100% is equal to the historic average. The following are SWE values recorded during the second week of April from 2013-2020:  2013 81%, 2014 60%, 2015 13%, 2016 76%, 2017 128%, 2018 63%, 2019 106%, 2020 87%.

As of September 1, 91% of the state is under one form or another of a drought designation.  Some portions of the state, including Jefferson, Crook, and Deschutes, are in extreme drought conditions with nearly half of Jefferson county is considered to be in extreme drought conditions. In June, Jefferson, Crook, and Deschutes counties applied for emergency drought status with the state, which in some cases can provide assistance and opportunity to individuals that may not have previously been available. Subsequently, emergency drought declarations were issued by Governor Brown on July 1 for all three counties.

All the above has made for another difficult irrigation season with limited supplies and less than favorable conditions throughout the season.  Considering current conditions, district water users are again advised to monitor ongoing supply conditions closely and regularly when considering late summer/early fall farm operations.

As of September 1, 2020, Wickiup Reservoir contains 13,500 acre-feet and has recorded record-low capacities throughout the entire 2020 irrigation season. With no foreseeable precipitation in the forecast, attempts will be made to ensure Haystack is kept at capacity in the event that modified district operations are necessary.  However, looking at all other current conditions, NUID is not anticipating the drawdown of Haystack and a district shutdown as long as the district’s demand remains low.

As overwhelming as all this may sound, NUID continues to work with various interests to find additional supplies of water now and into the future.  Some of these efforts are as simple as installing Variable Frequency Drives and Programmable Controls at the Crooked River Pumping facility to capture water that would have otherwise passed by, to new or expanded reservoir storage facilities within and outside the district.  Other considerations NUID is working on including water marketing opportunities from senior districts where full allotments are not needed or wanted, wellfields near main canal locations as a supplemental supply, obtaining City of Bend wastewater, the relocation of the Crooked River Pumping Plant downstream to Lake Billy Chinook, and the possibility of basin districts merging to create flexibility in water management within the basin.  Lastly, NUID and COID have maintained close ties through all of this.  The project COID will begin on October 1 will create approximately 30 cfs that will be made available to NUID in the form of summer flow. The irrigation districts have obtained significant federal funding to finance large scale piping projects that will free up water and help meet commitments of the forthcoming Deschutes Basin Habitat Conservation Plan.  Needless to say, no matter how simple some of these solutions may seem, each has its own list of hurdles and challenges in becoming reality.